Before starting a discussion about Gharanas of tabla. it is necessary to understand the phrase- Gharana. It can also be called a lineage or tradition. Just as a descendant takes over the form of a family, in the same way when a Playing-Style, Guru-Shishya(Teacher-Disciple) Tradition grows it forms a Gharana.

A total of six Gharanas of Tabla were recognized in Indian Music - Delhi Gharana, Ajrada Gharana, Lucknow Gharana, Farukhabad Gharana, Banaras Gharana, and Punjab Gharana. All of these Gharanas are different from each other on the basis of playing style, lesson, and execution of Bols. However, they belong to the same instrument. Let us now discuss the Origin, Development, and Characteristics of these Gharanas.

The foundation of this Gharana was laid by Ustad Siddhar Khan Dhadhi. The name of his pupils, U. Roshan Khan, U. Kallu Khan, U. Tullon Khan, and three sons U.Bugra Khan, U. Ghasita Khan, and their third son’s name was not found in records but his name is being known to take this Guru-disciple tradition forward. This third son of Siddhar Khan had three sons – U. Makku Khan, U. Modu Khan, and U. Bakhshu Khan. Who had played a very important role in the history of Delhi Gharana. U. Nathu Khan, U. Kale Khan, U. Boli Baksh, U.Gami Khan, U. Inam Ali, U. Latif Ahmed Khan, U. Anthony Das, U. Gurpreet Singh, etc. Many qualified tabla players, this Gharana has given.

In Delhi Gharana First and Middle Finger has a very important role in Playing that is why it is also known as ‘Kinar Ka Baaj’. Peshkar, Kayda, and Rela are mostly used. Most of the compositions of this Gharana are in ‘Chatrsat Jati’. This Gharana of Tabla is ideal for Solo Performance.

There is a Village named Ajrada in Meerut. There were Kallu Khan and Meeru Khan, who were brothers. They learned Tabla from Ustad Sitaab Khan and went back to their hometown. Where they thought many disciples and with their untiring efforts, they laid the foundation of a new Gharana called ‘’Ajrada Gharana’’. U. Shammu Khan, U. Chand khan, U. Kale Khan, U. Habibuddin Khan, U. Manju Khan, U. Hashmat Khan, U. Akram Khan, etc. ... are the prominent artists of this Gharana.
The characteristic of this Gharana is the use of Adi Laya, the phrases of this Gharana are meant to be played in adi or devadi laya and faster than Delhi Gharana compositions. This makes their compositions more difficult to improvise and execute. The style of playing this Gharana is similar to that of the Delhi Gharana. This Gharana of tabla is suitable for both solo and accompaniment. 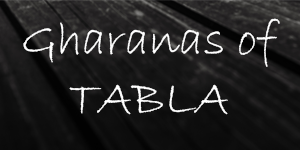 This Gharana is also a branch of Delhi Gharana. On the invitation of Nawab of Lucknow U.Modu Khan and U.Bakshu Khan of Delhi Gharana was sent to Lucknow, they created a new style named ‘Lucknow Gharana’ with their efforts and hard work. The influence of the musical and social environment of this region became the cause of innovation in their style so that they laid the foundation of a new Gharana. U. Mohammad Khan, U. Abid Hussain, U. Wajid Hussain, U. Afaq Hussain, Pt. Hirendra Ganguly, etc. .. are in the elite cast of this Gharana.

On the culture of Lucknow, the very effect of dance is seen from the beginning, which has a direct impact on the tabla masters. The playing style became stronger due to the accompaniment of the dance. In most of their compositions, they use both Kinaar and Syahi.

This Gharana came into existence when U. Bakshu Khan married his daughter to Haji Vilayat Ali of Farukhabad and gave him higher education in tabla. After that, he created many disciples and recognized a new Gharana. U. Imam Baksh, U. Hussein Ali Khan, U.Salari Khan, U. Munir Khan, U. Ahmed Jan Thirakwa, U. Amir Hussain, U. Karamat Ullah, U. Maseet Khan, U. Sabir Khan, etc. These are the most prominent artists of the Gharana.
Because this family was the branch of Lucknow, there is also a sense of style in the Gharana. Apart from this, gat, rau, and chhands are also used in this Gharana.

Pandit Ram Sahai, the first tabla player of this Gharana, got his education from U. Modu Khan of Lucknow and laid the foundation of the Banaras Gharana. Then his son Pt Bhairav ​​Sahai and grandson Pt Baldev Sahai and Great Grand Son Pt. Durga Sahai carried forward this lineage. Pandit Kanthe Maharaj, Pt. Kishan Maharaj, Pt Anokhe Lal, Pt. Bikku Ji, Pt Samta Prasad Ji, etc. are the prominent artists of this Gharana.
This Gharana of tabla is more famous for its accompaniment. In this style Laggi, Ladi, parn, rela, chakradar, and chhand are most famous and used. This Gharana is the highest in terms of Thumri, Dance, and Solo-Playing.

All the above gharanas can be divided into two parts - Poorab and Paschim. Under Purab Baaj, the Lucknow Gharana, Benaras, and Farukhabad fall in this category, and Delhi Gharana and Ajrada Gharana fall under Paschim Baaj. Due to the development of Punjab Gharana itself, Punjab is different from these categories.